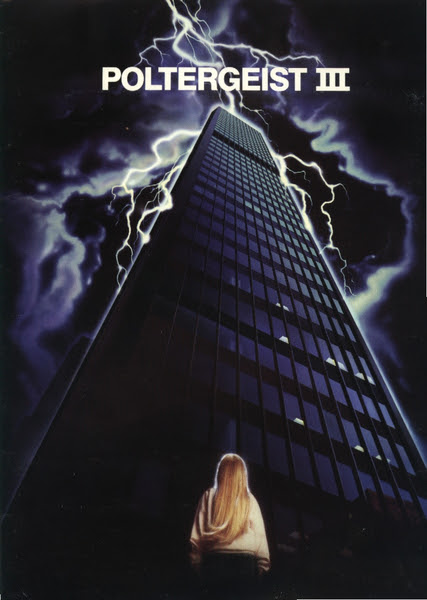 There is something about the number three.  Three strikes and you're out, third time's the charm, etc.  Also, the warning that "death comes in threes".  This expression couldn't ring more true than for the Poltergeist film franchise.  From the tragic murder of Dominique Dunne shortly after the release of the first film, Julian Beck's haunting final performance as Reverend Kane in Poltergeist II and the heartbreaking (and even sadder, unnecessary) death of Heather O'Rourke that overshadowed the third and final film.  An air of mystery has always hung grimly over this franchise.  For years, David Furtney has attempted to shed some light on the darkness that has blanketed what happened behind the scenes of P3, both during production and how Miss O'Rourke's death was handled during post-production.  Through years of research, phone calls and e-mails, Furtney has gathered a wealth of knowledge regarding these movies, rivaling that of people directly involved with the making of them.  He used this information to create what can only be called THE quintessential website for fans and noobs alike, poltergeistiii.com.

Before Scream Factory announced that they'd be releasing both Poltergeist II & III on Blu-Ray on January 31st, they contacted David to not only consult on the special features, but to record a brand new commentary track for P3!  In addition, the Blu-Ray will allow fans to see, for the first time, the alternate ending that was shot prior to Heather O'Rourke's death and then hidden away for reasons that vary depending on who you speak to, if they acknowledge its existence at all. David Furtney was kind enough to take time away from his day to day life to speak to me about his experiences with the film itself, as well as with his website and his involvement in the upcoming hi def re-release of Poltergeist III.


Secondhand Terror:  When did you see P3 for the first time?

David Furtney:  I first saw Poltergeist III at the age of 8, during the same month as the movie's opening in June of 1988. I'd already seen the first two movies on VHS many times over, and had heard about Heather O'Rourke's tragic death from my parents.  My babysitter at the time had seen P3 before me, so I peppered her with questions about it. I found it odd that Steven, Diane and Robbie weren't in it. I even asked my babysitter, "but don't they show Carol Anne leaving her parents' house before she goes to Chicago?" When my Mom and I finally went to see it, it was a Saturday afternoon matinee. There were only two other people in the auditorium: two teenage guys who sat several rows behind us on the back left. During the movie, they would occasionally make annoying ghost noises. My Mom fell asleep half way through the film, until the cold air blowing down on us from the AC vent directly above forced us to move back a few rows. Funnily enough, the cold air helped bring to life the "ice" motif of the film!


ST:  Do you remember your initial reaction?

DF:  I loved it! I remember going home and telling my younger sister how great it was and that it was the "best" one. Ha. Obviously, your judgment is a bit clouded when you are an 8 year old kid. But I'm glad I saw it at that impressionable age. Otherwise, I probably would have thought it was crap. And because of the way the movie ended (with that lightning strike and Kane's evil laugh) I was hoping for a Poltergeist IV.


ST:  When and why did you decide to create poltergeistiii.com?

DF:  I first created the site back in 2005. There were a couple of other Poltergeist fan sites out there (including a really great one focusing on Rev. Kane and Poltergeist II that is sadly no longer around). I wanted to create my own site that focused on Poltergeist III, especially so I could highlight my research into the original ending of the movie and the later re-shoot. Back in 1999, I'd started a prototype of the current site with a friend of mine that was hosted by another company, but we never really developed it very far and eventually abandoned it. It might still be out there somewhere. Over time, as poltergeistIII.com expanded, I added sections focusing on the first two films in the series. I'm amazed when I see that the site receives thousands of visitors from all over the world.


ST:  Why do you think (director) Gary Sherman denied the existence of the original ending for so long?

DF:  I'm not sure. I'm sure he has his reasons. Maybe it was to protect Heather's memory, or perhaps because he just didn't like how the original ending turned out? I was told that he was unhappy with the special effects sequence in the original ending, including the "frozen" bodies and the way in which Kane's face "cracks" with lines of light across it. That model head was created by Dick Smith, who hand carved very fine lines onto it so the light could shine through from behind. Ultimately, there was no movement in this prop head and it looked just like what it was, a prop (you can see the publicity still photos of it on my site). Interestingly, this version of Kane's demise is not seen in the footage that Scream Factory discovered. Instead, they found what I believe is an intermediate version of the original ending that was being considered in between the time the MPAA issued the completed film a PG rating (in November of 1987) but before Heather O'Rourke died on February 1, 1988. In this version, instead of Kane's face cracking and "exploding with light," they used insert shots in which you see Kane's face decomposing on camera. His hat blows off his head, his eyes roll up, and his mouth opens. For that new sequence, Dick Smith, Doug Drexler, and John Caglione created a mechanical head (with a movable jaw) whose wax face could be melted with a propane heat blower (a revised version of this effect would later be used in the LA re-shoot, when Nancy Allen cuts off Kane's head with the shovel and it rots on the floor). Also omitted from this version of the ending were the shots (mentioned in the script) of Carol Anne seeing Tangina one last time in the mirror and tearfully waving goodbye to her. Instead, you see the mist clear and the family (and Scott) sitting on the bed, smiling and looking out the window. Special effects make up artist Doug Drexler once sent me copies of his notes from late 1987, during the time they were planning what to do for the re-shoot of the ending. In the notes, there is a line that says "I don't think Zelda should come back at the end. It's very confusing." This likely explains why the scene of Tangina waving goodbye to Carol Anne was removed and was not in the clip Scream Factory found.


ST:  Both Sherman and yourself were involved with Scream Factory's upcoming Blu-Ray. Did the two of you have a chance to meet? If so, did he apologize for the comments he made about you in GoreZone magazine?

DF:  No, I did not meet or otherwise speak with Mr. Sherman. I also haven't listened to his audio commentary yet, so I'm looking forward to hearing what he has to say (especially about the ending!). Scream Factory is located in Los Angeles, but I live on the other side of the country. I was able to record my commentaries from home. I watched the movies in my home theater room while they recorded my voice via Skype. It was a bit nerve wracking at first, since I'd never done anything like that before (not even a podcast). I've never been the type who likes hearing their recorded voice played back, but I couldn't pass up the opportunity to contribute in such a cool way to these two releases, and I'm really grateful to Scream Factory for letting me do it.


ST:  How much involvement did you have with the new Blu-Ray?

DF:  Before Scream Factory had offered me the chance to do the commentaries, I had been emailing back and forth with their Executive Producer, Cliff MacMillan. I'd been providing background info on the films and also sent copies of the shooting scripts for both P2 and P3, along with some still photos, concept artwork, etc. Some of it will be featured on the discs. In October (of 2016) Cliff let me know that they had discovered what they believed to be the original ending footage of P3, stored at a facility in Seattle. I agreed to keep quiet about it for the time being, which was difficult! But, I kept my mouth shut. I knew they wanted to be able to announce it themselves, so I respected that. In November, Cliff sent me the clip of the original ending and asked if I thought it looked intact. It was pretty wild to suddenly find myself watching the very thing I'd spent about 18 years trying to prove was filmed! I let him know that it did look intact, with the exception of the few things I mentioned above.


ST:  Why do you think the deleted scenes were not included on the Blu-Ray?

DF:  I was told that Scream Factory paid to search an entire pallet of film at that facility in Seattle, but unfortunately they did not find any other deleted scenes for either P2 or P3. They only found the negatives for both films and the P3 ending footage (which was missing the soundtrack, so Scream Factory added music and subtitles from the script to show what the dialogue was). Not to say that the other deleted scenes might not be floating around out there somewhere, but in all likelihood, MGM probably tossed them out sometime in the early 1990s. But, I did try to discuss what the deleted scenes were during my audio commentaries, whenever possible. Some of the script pages for the cut scenes (and publicity stills for a few of them) might be on the discs as well.


ST:  While working with them, did you learn anything new regarding the film?

DF:  When seeing the original ending footage, it was surprising to find out it featured that alternate version of Kane's demise. I knew that Doug Drexler's team had been planning it out before Heather's death,  but I didn't realize they'd actually shot it (the version where Kane's face decomposes). I was expecting to see the original concept in which the lines of light erupt across Kane's face, but alas it seems we'll only get to see that in the publicity stills.


ST:  Out of all of the ideas that were proposed for a fourth film, which was your favorite?

DF:  I'd always hoped to see a "Carol Anne grown up" sequel. Especially so many years later, that seems like it would be the only way to go. I think it would have been best to have new ghosts involved. But the alleged prequel idea about Kane and his followers would have been interesting too.


ST:  Aside from the failed remake, where would you like to see the franchise go?

DF:  I'd love to see them make another sequel to the original trilogy (ignoring the remake would be just fine with me!).


SF:  Not including the Poltergeist franchise, what are your top five genre films?


Thank you, David, for your insight.  For more information about the franchise and about David Furtney, go to poltergeistiii.com.  Both Poltergeist II & III will be released on Blu-Ray on 1/31/17!  Preorder below and look for my review of the P3 Blu-Ray soon!